It is 5:30 am on March 5, 2020. The birds are singing and it is going to be a bright sunny day.  I heat up some water for my instant Mount Hagen Coffee and Quaker Instant Oatmeal, Protein Cranberry Almond with Nature’s Earthly Choice Goji Cacao Superfood Blend added in. When I have this for breakfast, I usually don’t get hungry until almost 11 am.  While the water is heating up on the stove, I move on to pulling a brace on my left ankle. I need extra support. I usually am able to start hiking without an ankle problem, but within an hour, I have bones that feel out of alignment. The ankle brace seems to keep the bones in place. A doctor a few years ago told me I had RA because my numbers for an auto immune disease were slightly high.  In 2017, I had an X-ray on the left collar bone attached near the breastbone and it looks very different from the right side. It is very pitted and I was told there is nothing that can be done with it. I also have very sore elbows which have happened since hiking the AT.  I think it is from the motion of using hiking poles. My left wrist and bone to the thumb also has moments of pain.  Sometimes the pain of these areas wakes me at night.  I try not to over use any of these joints, but I usually don’t notice until that is exactly what I have done.  I’m no longer a spring chicken as the saying goes.

Anyway, I now know that I have to tape up and brace up my joints.  My desire to be outside is so strong, that I will do whatever it takes to get me there.  So on this particular morning, I was taped and braced and Vitamin I supported.  With a full belly, Tom and I headed out of the campground by 7:00 am. Kitchen Creek Road is our destination.  I had my slack pack with my lunch and emergency gear if needed and a camera and my phone.  Tom pulled into the parking lot on Kitchen Creek Road. I thought I would see the construction worker Fred from yesterday, but he wasn’t anywhere in sight.  I said goodbye to Tom and headed up the trail. It was now 7:18 am. 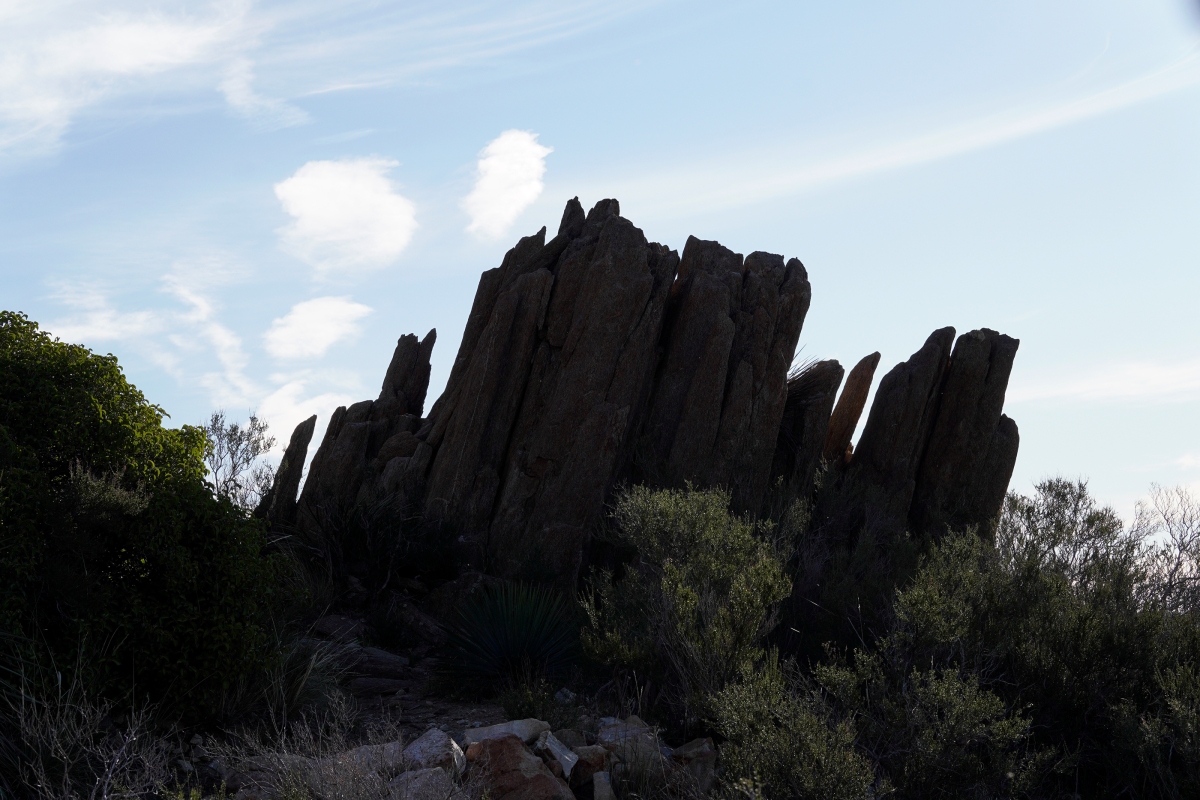 I would be hiking up in elevation for most of the day towards our campground.  As I started in the shadow side of the trail heading to Fred Canyon, I saw a silhouette of a hiker up ahead.  I wanted to take my time this morning to let my stiff joints loosen up from the previous day’s hike. When I saw the hiker ahead of me stop, I also stopped. I didn’t want to get ahead of him, only to have him pass me two seconds later. 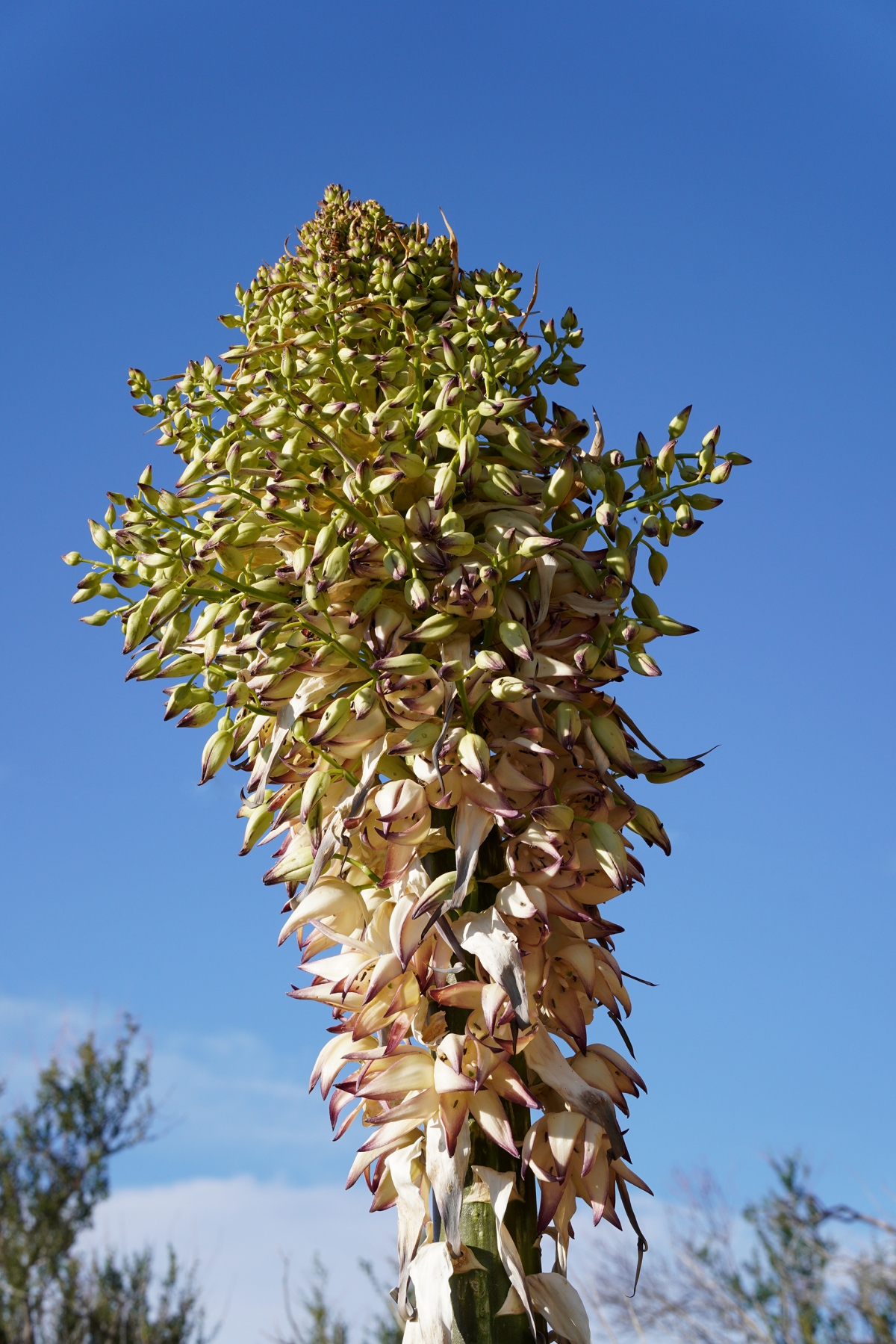 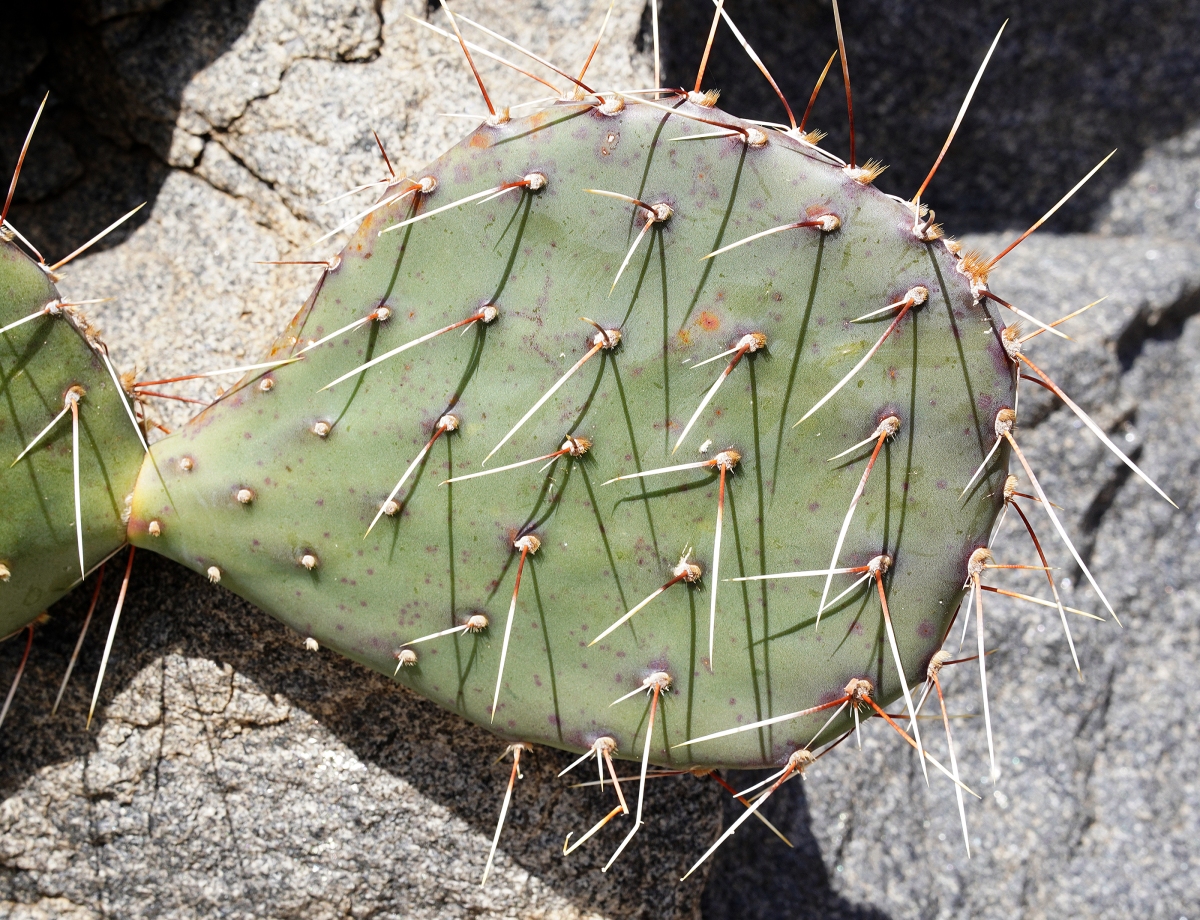 So, I took some pictures of the plants around me as I waited for him to continue on.  He stopped three more times before I decided I was limber enough to pass him.  We chatted a little as I went by. I could tell he was hurting and he was sweating with exhaustion from the 1000’ climb.  I didn’t seem him again.

The sun felt so good in the cool morning air. I continued along at a nice easy pace. There are iconic places along the trail and as I rounded a corner I saw a sign many hikers of the PCT have posted in their vlogs. It is a sign warning of a safety hazard of unexploded military ordinance in the area.  Hikers are warned to stay on the trails and roads. If and ordinance is found, we are not to touch or approach, but to note the location and call 911.  Of course, this is when my mascot Yuri decides to start goofing around as you can see in the image.  I just never know when he will decide to go on his own little adventure.  I managed to grab him before things got out of hand.

The next few hours I spent hiking higher and higher to an elevation 6000’. My knee started hurting around noon and so I took a lunch break which included a pain pill.  My knee continued to hurt for the next hour and then all of a sudden the pain subsided and the rest of the day was spent pain free.  I managed to see a couple of lizards. Boy, they are sure fast.  I tried multiple times to move real slow and get low to the ground without bending that dang knee, but they usually took off before I could get close.

I finally was able to manage to get close to a lizard that looked like he had a fancy collar around his neck.  He sat still for the longest time and I was able to move all around him.  Afterwards, I though, “Geez, there could have been rattlesnakes in that brush!”

As I finished taking these pictures, I heard someone talking coming up the trail behind me and as I turned to look, a hiker came into view.  I waited for another hiker as I knew he had been talking, but no one came.  As he passed me, he commented on how hot it was.  I realized then as he passed by, this same guy also started on March 2nd. He had been talking to himself and that was what he was doing now.  I waited for him to go up the trail a ways before I headed after him. 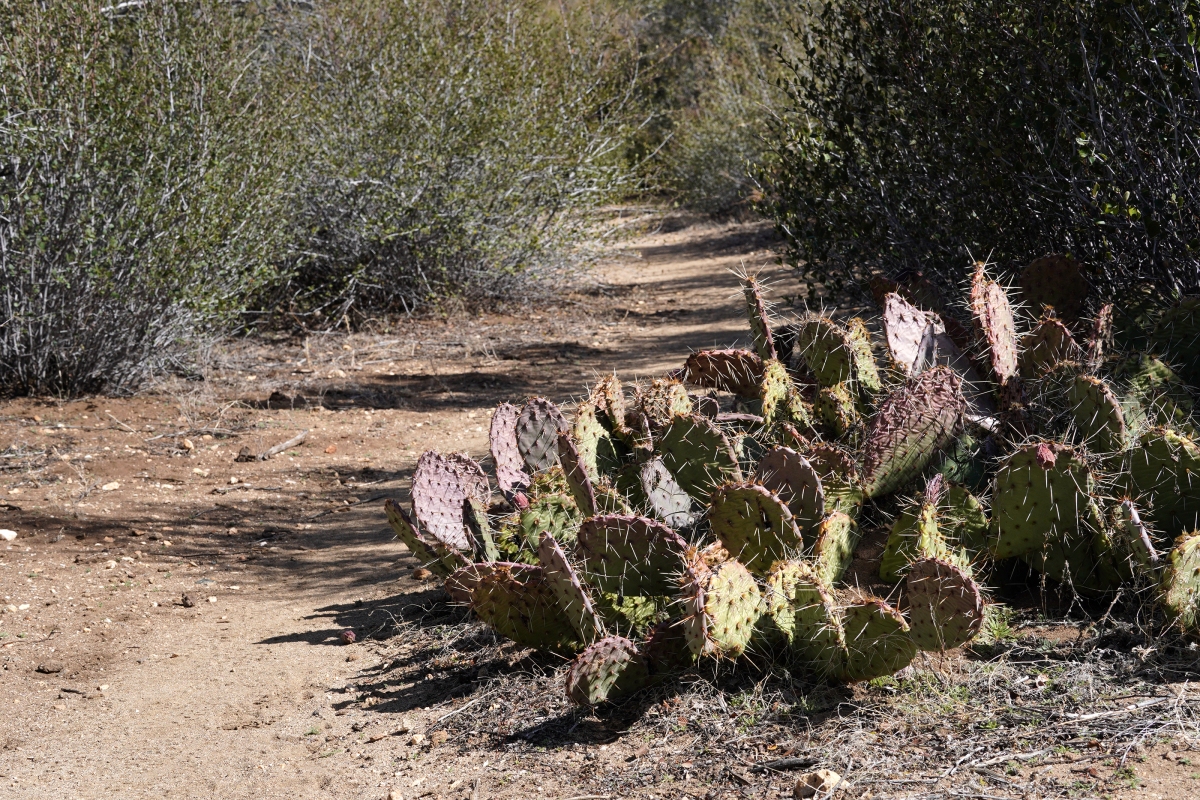 The next section I entered was quite warm. It was 58 degrees, but it felt like 80 to me.  I would have died of heat exhaustion if I had to do this in April or May.  Being from Minnesota has its advantages.  The trail isn’t as busy this time of year. In fact, today I would only see a total of 6 hikers. 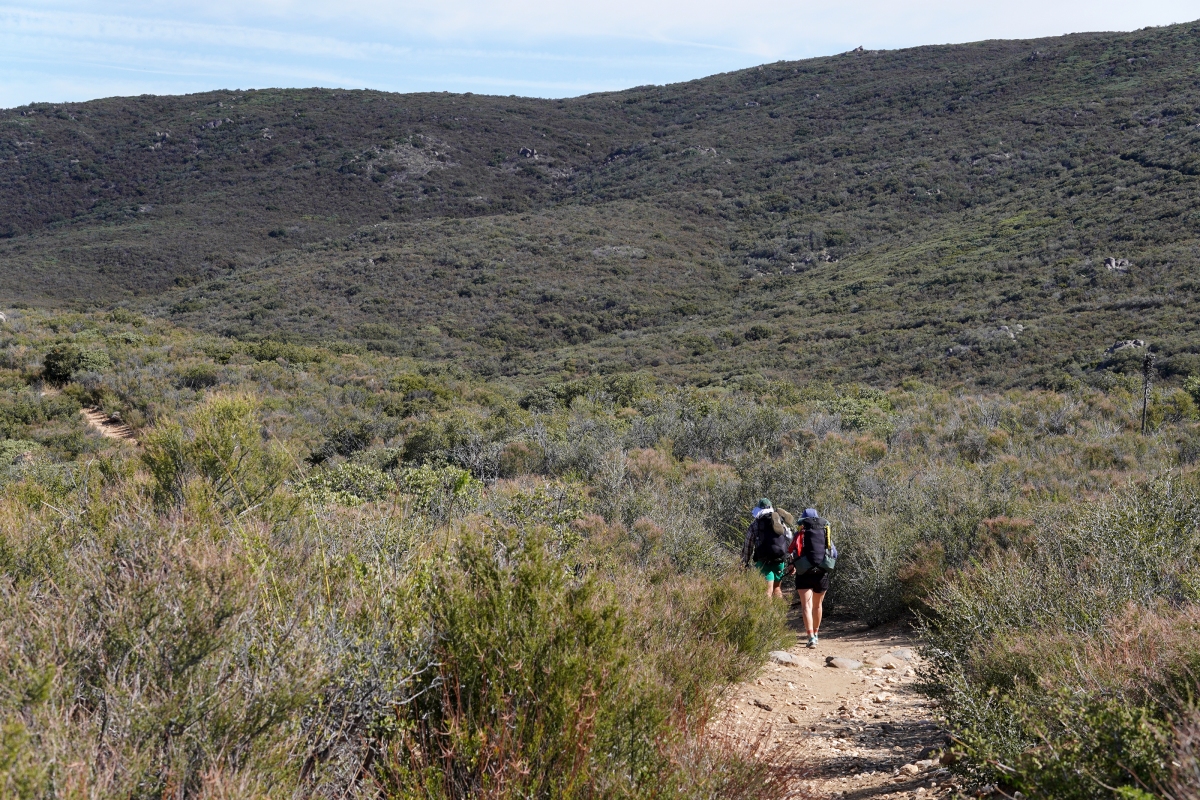 Not sure what to think about that when I thought 50 were starting every day since March 1.  Strange. When I was about 2 miles from the Burnt Ranchera Campground, I text Tom to let him know my location.  His plan was to hike out to meet me. I continued on and when I rounded the next bend in the trail, that is when I met Kyle was was from Indiana (and who became part of my PCT tramily).  He looked exhausted. We exchanged names and where we were from and that Tom was meeting me. I turned to leave, when I noticed Tom coming down the trail.  I waited near Kyle so Tom could meet him. We talked for a while and then as we were heading off, Kyle asked if he could join us and we said. “ Yes.”  We found out he was also heading to the campground to meet his wife Amy.

I don’t know why the last couple of miles of the day always seem the longest.  Kyle was getting slower and slower and Tom and I decided to stop in the shade among the snow and take a break so Kyle could get refreshed.

Within 15 minutes we arrived at the junction sign for the campground and our campsite.

As it turned out, Kyle and Amy were in the site right next to ours.  It was 2:30 pm and I had gone 11 miles.  The rest of the day I rested my knee.  The evening was spent talking to Kyle and Amy and realizing they had been at Lake Morena and now Mount Laguna when we were.  Amy had noticed us on day two at Lake Morena when I came limping into the campground with Tom.

Kyle and I made a plan to slackpack together for the next few days.  He saw the advantage to slackpacking over carrying a full backpack. I know I was enjoying the change.

It is always interesting to me, who gets put unexpectedly onto my path. It always leads to some interesting adventures…sometimes good, sometimes not so good.  I didn’t know yet, which this was going to be. Only time could tell.