I think when Paul, a fellow thru hiker, announced at camp the night before entering the White mountains, that we had only done half of our climbs to Everest, my heart sank. Documentation of the Appalachian Trail states, “Hiking this trail is like summiting Mount Everest 16 times.” It means the elevation changes are equal to that of summiting Everest 16 times. I had 2 states left,  New Hampshire and Maine. That meant that I had to summit Everest 8 more times in 4 weeks. 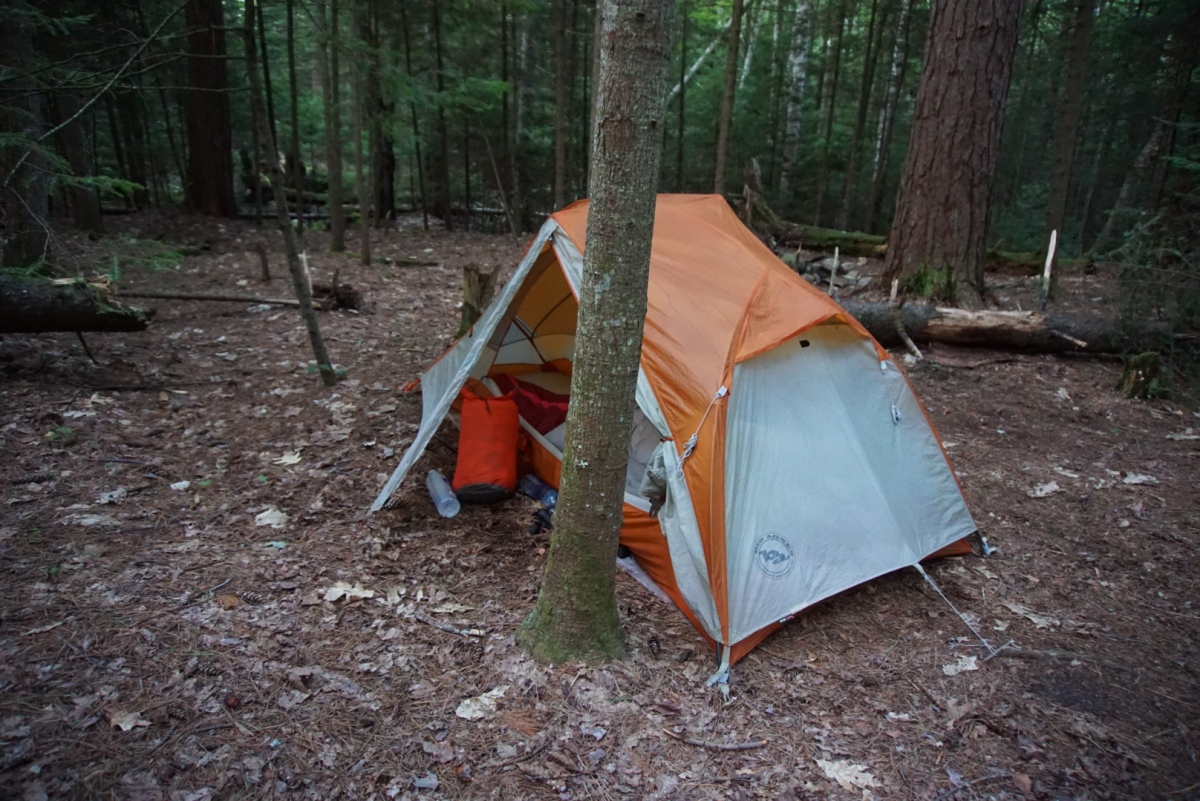 I crawled into my tent that night thinking, “How am I ever going to be able to do this? ” I didn’t loose any sleep over it. I have the uncanny ability to instantly fall asleep the minute my head hits the pillow. Well, in this case it would be when my head hit my sleeping bag stuff sack filled with my stinky clothes from the day’s hiking. I mean seriously people!  This isn’t a glorious life. I didn’t run off to Hollywood to become an actress.

When I entered the White’s,  it reminded me of a set off of the TV series MASH. A simple sign announced my location. There was a tarp under which sat an empty table and empty 5 gal. buckets. All the good trail magic was gone, but there was water. I filled up my water bottles and was packing up to leave when Puma and his crew rolled in and decided to have a “safety” (smoke pot) meeting.  I told them,  “See ya up the trail.” and I continued on.

10 Bear and I had made a plan to stay at The Notch Hostel. We were going to do a 17.3 mile slackpack the next day. We were still under the false pretense of thinking we could do our pre-White Mountain miles. Which means that we thought we could do at least 2 miles an hour. We were to find out the mountain had other ideas.

The day started out sunny and warm at 8:30 am we were headed down the trail. My pack was very light, lunch,  water, rain gear, headlamp and camera. 10 Bears pack was her same pack, minus tent, clothes, cooking supplies and food bag.

She still carried significant weight due to the fact she is making documentary film and needed to bring camera and gear for the camera.

We started the day together climbing up Kinsman Mountain. The distance between us eventually grew and when I got up to where the mountain leveled off I waited for 10 Bear and we had a snack and she did some filming.

Let me say here that descents are steep and often dangerous and this was no exception. We headed down. The views were wild. We got down to the bottom and I continued on. I eventually stopped at the  Eliza Brook and had lunch. After half an hour I looked up and read the sign post that started we head 7.5 miles to get to the road to end out day. It was now 2:00 pm.  I did the calculation of miles and time and realized we had to get moving or we would be hiking in the dark.

A few problems exsisted:  1.  I didn’t know how far back 10 Bear was. 2. The weather was changing to overcast, possibility of rain. 3. I had never hiked with my headlamp at night on the trail. 4. I dont have cell service most of the time. I decided to continue on. I knew that 10 Bear was filming and would eventually show up. As was the case many days before.

When I got to the Gordon Pond signpost, I sat down to wait for 10 Bear. I waited an hour. It got darker and darker. I got cold from my sweat. It was misting out. I debated waiting longer in the woods. The road was .7 miles away. I was now thinking what if something has happened to 10 Bear. I  know nothing of mountain rescue. I decided to head to the road. Better to get help from someone who knows the mountains, than having to recur the both of us.

I got to the road and waited 15 more minutes and then I borrowed another hiker’ phone to call the hostel. (Once again, AT&T had no service) I got the hostel’ answering machine and as I was hanging up, the hiker asked, “Is that your friend? ” I turned and looked and sure enough, it was 10 Bear, much to my relief. We had missed our shuttle, but we were able to get a ride from a man from Warren,  NH who was giving rides to hikers.

I later found out 10 Bear had a horrible day filled with injury and mayhem. But that is a story she must tell. I learned, always expect the unexpected where the White mountains concerned and just know,  you will do more climbing than hiking. We were on day 1 and it looked as if we were in for a wild time.