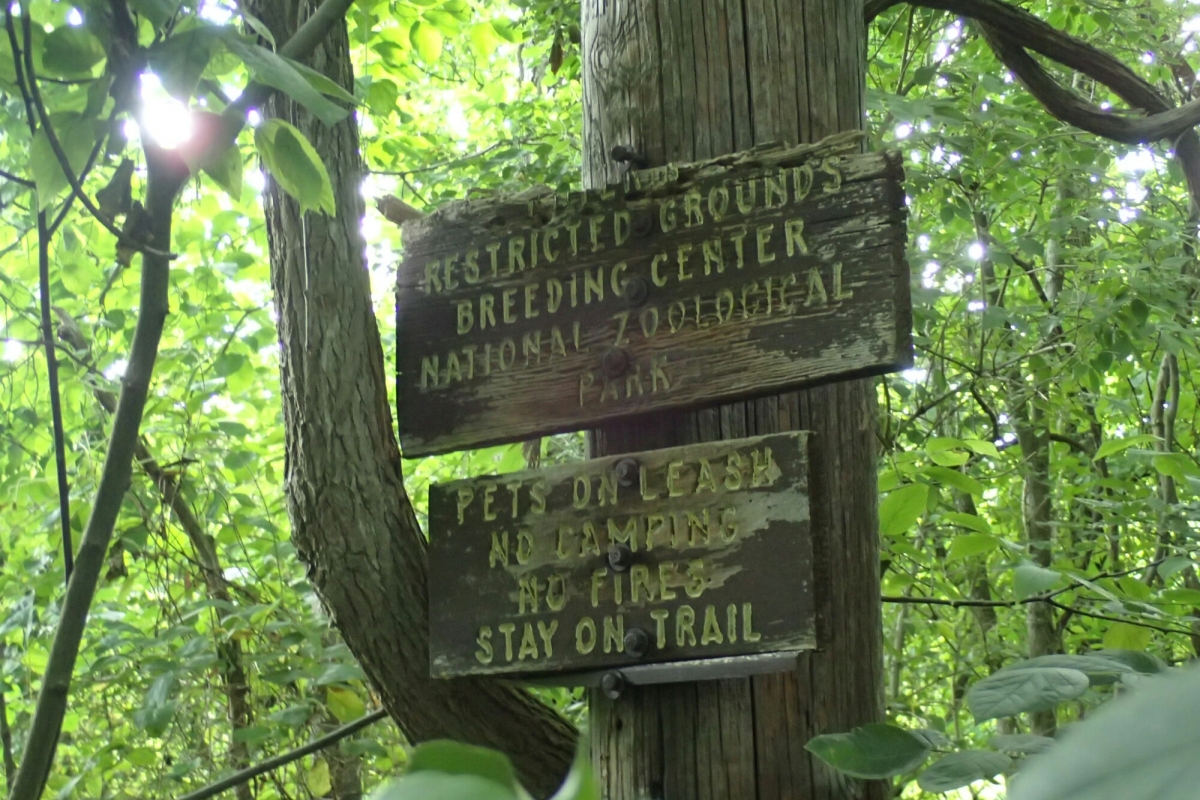 It’s now been two weeks since I got a cold after sleeping in a hostel in Waynesboro,  VA. I slept in the top bunk while a young man with a cough slept on a couch next to and below me. There were actually 12 of us hikers sleeping in a small basement room with bad air exchange. Seriously it was wall to wall hikers. Then two sores developed between my toes on my left foot. They were so painful I started to limp. I don’t know if the sores were athlete’s foot, a poison weed, or spider bites. I don’t know if the combination of the illnesses lead to the peculiar sights of the past week or something else? Let’s see what you think.

The day began innocent enough. The sun was shinning. You can see it in the picture above. It’s what the picture says that gave me pause. “RESTRICTED GROUNDS; BREEDING CENTER; NATIONAL ZOOLOGICAL PARK.” The sign Belo it was like a second warning.  “PETS ON LEASH; NO CAMPING; NO FIRES; STAY ON TRAIL.” Needles to say, I was beginning to get all kinds of thoughts of government experiments. Then came the gate.

And then the fence.

The trail got darker and darker as we worked our way further into the woods. As we rounded a tight curve in the trail, a smell so fowl hit me in the face. It was so awful, I sped up to get past and beyond this area. Then right before a powerline, I saw something fast, grey and large dart through the brush parrelel to the trail. I quickly caught up to Spirit and said,  “A bear just darted in the woods and are in that brush.” We looked at the brush, but nothing moved. Even as I had said it was a bear,  I knew the statement want true. I knew I hadn’t just seen a bear,  but something I couldn’t identify.

It is now that the sky got dark and thunder started to rumble in the sky. We were only a half a mile from the next shelter. I picked up my pace with Spirit coming behind me. It was up hill and soon I was alone as Spirit picked her way carefully along the trail. I heard something coming across the top of the trees. Not knowing if it was wind or rain, I stopped and threw down my pack and started to pull out my rain gear. Within seconds I was in a down pour, desparatly try to get my rain jacket on, curled in a ball trying to keep my shoes dry. As I was doing this, an older couple came walking by and asked me if I was okay. I replied, “Yes, I’m just trying to get my rain gear on.” Within minutes the storm had past and as usual, I was wet.

We got to the shelter and it would be two hours before we saw the next hiker. Pace came in telling us he had stopped to put his rain fly on his pack. The next thing he knew, a tree fell in front of him and then one feel behind him. It was then he got as small as possible behind another tree and waited the storm out. The next two hikers were an hour after him and they reported 20 downed trees. The following day we would hear that a tornado went through the area. We would be the last  people to go through the undamaged trail. It was now an obstical course.

The next day was overcast and threatening rain. We had areas of rock to hike over and around. While doing so, I came across this interesting print and water mark.

I’m not sure what kind of creature left this behind, but it reminded me of the story in an old Saga magazine about the Ape-man of the Whiteface Reservoir. http://www.bigfootencounters.com/articles/hansen.htm

I wasn’t sticking around in case the creature came back. It wasn’t much longer and we came to the infamous Roller-coaster of the Appalachian Trail. This is the part in the trail where hikers enter with anticipation, excitement and joy. 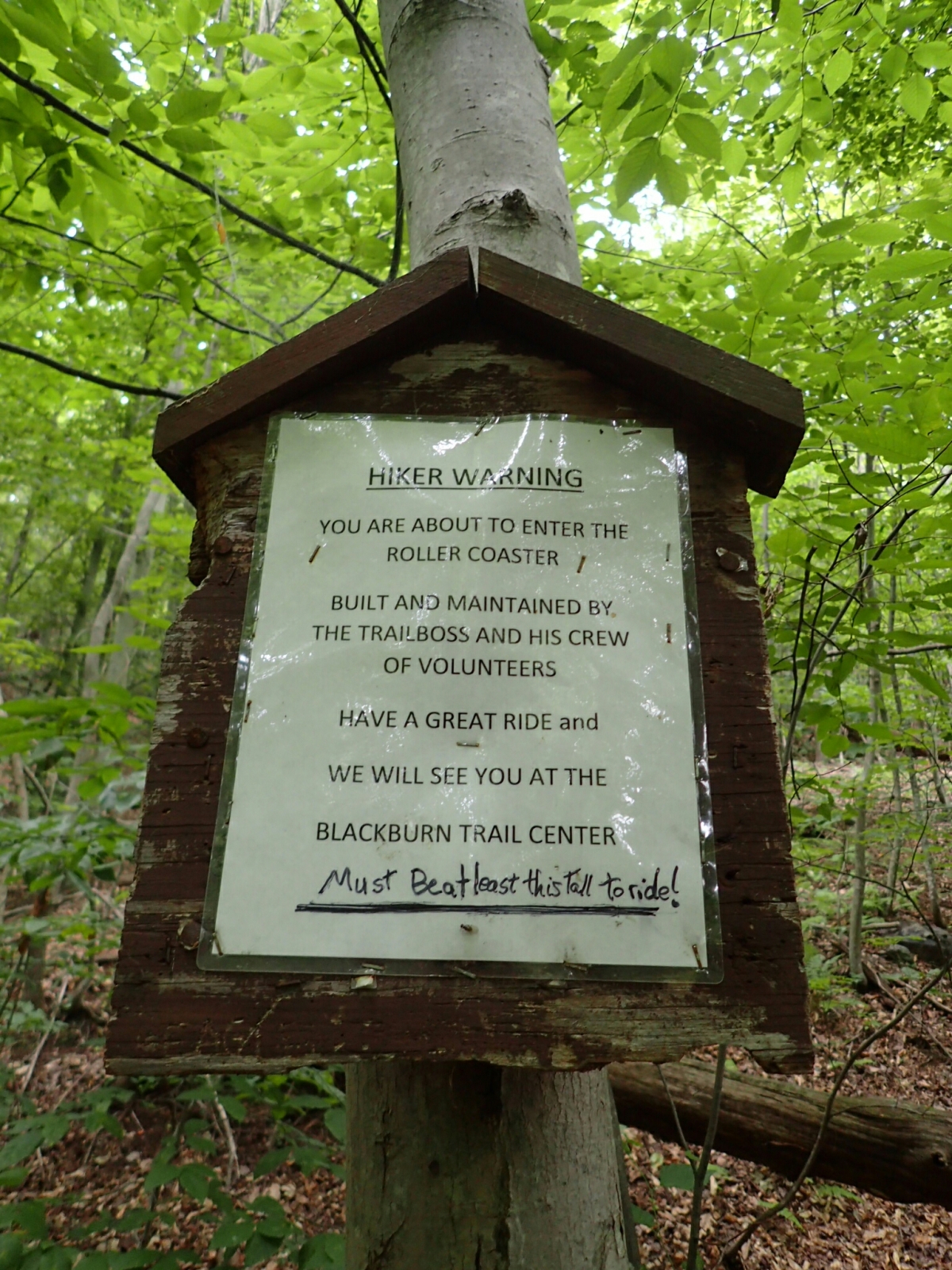 All kidding aside, we think that the person or people who put in this part of the trail was a sick, sadistic, bastard. It is 13.5 miles of ups and downs that only a lunatic would enjoy hiking. 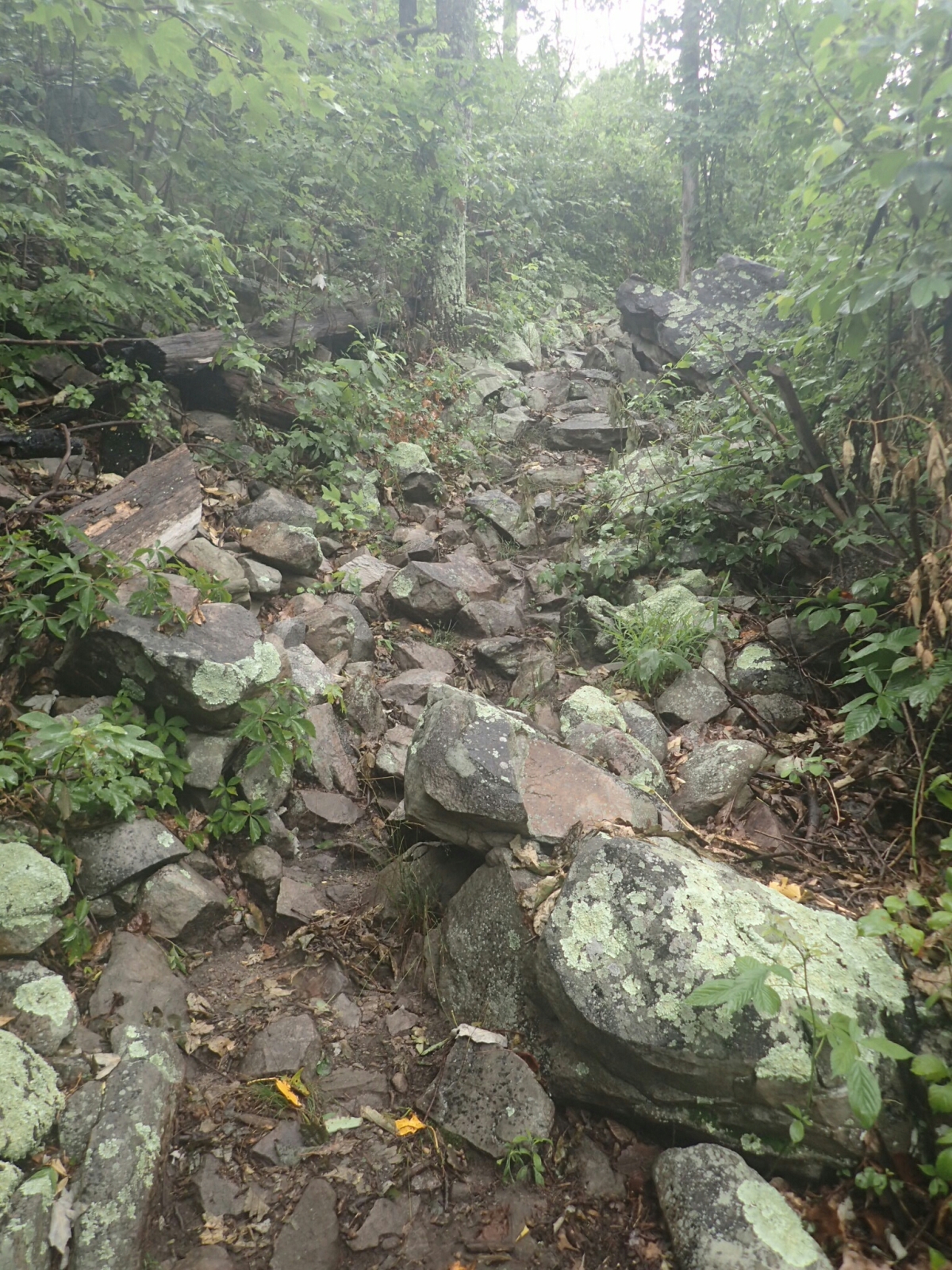 Thankfully not too far away, there is a slice of comfort called the Bears Den. The outside is a little forbidding, but when all was said and done it was a safe haven.

The next day was actually the nicest hiking day in quite some time. We were at the top of a ridge and it looked and felt like it had been occupied before the civil or revolutionary wars. In fact, I once again found a point from an arrow. Then I found some thick, glazed pieces of pottery on the trail. All evidence of another time.

It really was peaceful.

Now we were on to Harper’sFerry, WV. I had just entered another state.

Now it was time to hike into the city and get my picture taken at the ATC headquarters and register my hike.

With that completed, we headed up to our hostel for a good night’s sleep or so I hope. I hope everyone hasn’t had a week like mine, but if you have I would like to hear it around my next camp fire.

PS-please don’t share this with my mother as she is already anxious enough.