Kwaaymii Point, that is our end destination for today.  We, Kyle and I, have figured out the next three days of hiking. Our on points and our off points.  We have decided to do as much slackpacking as the trail will allow.  I hadn’t planned on a tramly this soon into the hike, but Kyle seems upbeat and in need of advice about initial trail life.  I am willing and able to help him with a few pointers, even though I think that every hiker needs to find his or her own way.  What works for one, may not work for another.

We head out from Burnt Ranchero Campground at 7:30 am. We amble around the campground back to the PCT.  When we get to the campground trail that winds us back to the PCT, Kyle wants to head in the opposite direction.  I tell him, “That’s the wrong way.” He stops, looks at me puzzled and tries to tell me that I am wrong.  Ha, ya right!  After a brief discussion about how we came into the campground the previous night, he doubtfully follows me to the PCT trail.  When we get the that junction with all the signs, he finally agrees that I was right.  He then proceeds to tell me how this wouldn’t have been the first time that he got lost on the PCT. He spent an hour lost near the Mexico/US border. He told me eventually the Border Patrol had to point him in the right direction.

I didn’t have time to gloat, because thirty minutes later when we were crossing our first road, Kyle wanted to power up with a quick snack, (eye roll, we just left camp) I discovered that I had forgotten my water. I told him since we were so close to camp, that I would call Tom to bring me the water I had set aside. Kyle didn’t want me to call, but I did anyway and five minutes later Tom arrived with my two water bottles. It wasn’t like me to forget anything, especially water. I must have been thrown off because of having a new hiking companion.  That’s what I am going to blame it on. I hate to think of karma. 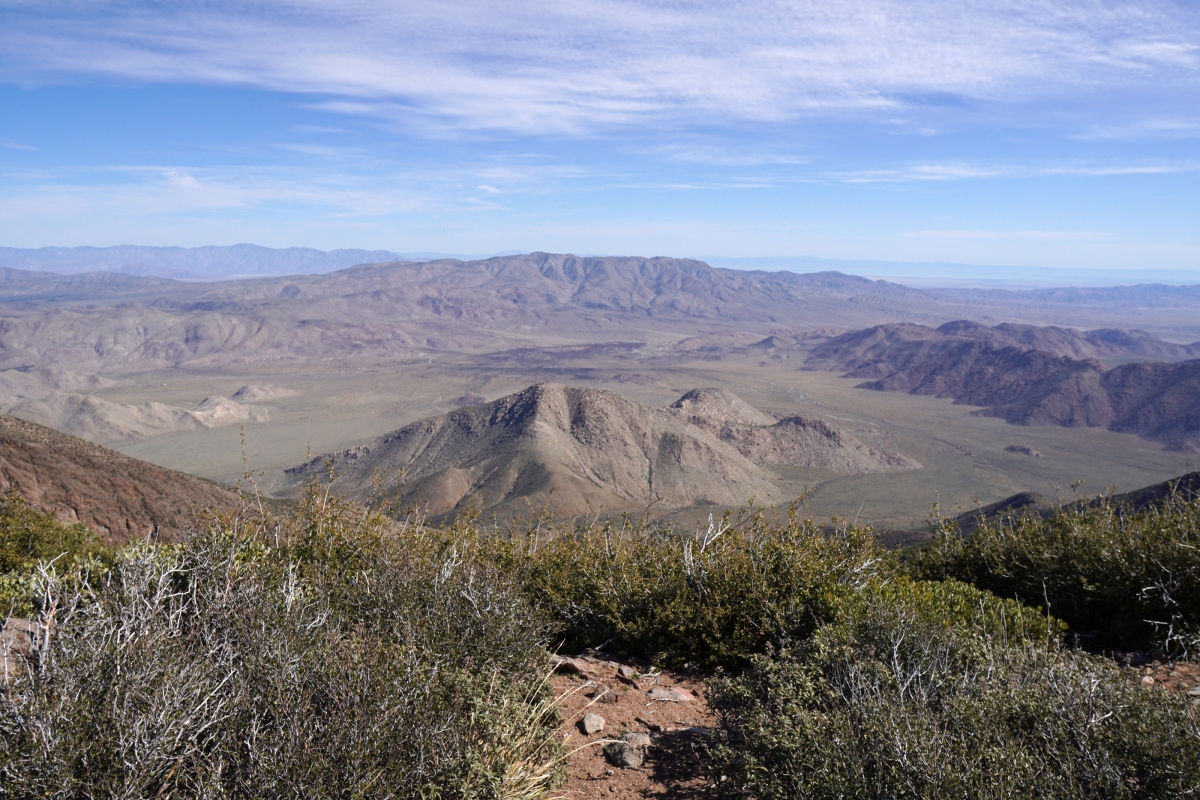 It was a beautiful sunny day with temps just reaching 50 degrees. Kyle and I got to know each other a little bit along the way. He was recently retired and this had been his dream, to hike the PCT. He told me he had read a book about it and wanted to give a thru hike a try. Other than that, he had studied maps. Previosuly, he and a friend had been riding bicycle for many years across the country. He had converted his RV to fit him, his wife Amy and their dog Betty.  He was worried about Amy spending 5-6 months waiting for him along the trail and was glad Tom would be near if she needed anything.

Throughout the day we smelled smoke. At first I was concerned about a wild fire. California has so many of them. Then I remembered that Tom had told me he saw signs near the campground of a prescribed burn for today. When we finally got a clear view of the smoke from the fire, I was hoping that Amy and Tom weren’t having a hard time breathing all that smoke filled air.

This day we wouldn’t see another hiker. It still puzzled me where the 50 hikers a day were? I figured there must be a lot of flip-flopping going on. That is when a hiker picks any point in the trail to start their hike and heads north or south and then when that section is complete, drives to their starting point and heads in the opposite direction.

Right before the end of the day, we did see 2 day hikers.  We got the usual questions day hikers ask, “Are you doing a thru hike?” While Kyle answered them, I sat back and listened. This couple talked about all the hiking they had done along the PCT over the years.  The brother of one of the hikers, we were told, had climbed Mount Whitney from every conceivable direction.  Kyle had mentioned about how he wanted some advise before entering the Sierras. The brother was also a guide. I took down all the information, as Kyle stated that he really didn’t know how to put things into his phone. After we left the couple, I told Kyle he really should call the guy, at least for advice if not to be guided through. Remember, he has a tendency to get lost. Mountains are no joke. It is early spring, and even though there wasn’t a major snow pack this year in the Sierra, a hiker could get lost or loose their life. It has happened. I was still on the fence about hiking through San Jacinto area as there is also snow there. I had bought an ice axe, but I had never tried to self arrest. It isn’t like there are mountains in the midwest, and we would both be considered to be from that area.

Within 2 miles, we came upon Tom heading in our direction and so we hiked past the Pioneer Mail Picnic Area just off  the Sunrise Hwy and headed towards Kwaaymii Point.  What a fantastic view to end today’s hike of 11.8 miles.

“The worst moments in life are heralded by small observations.”
― Andy Weir, The Martian